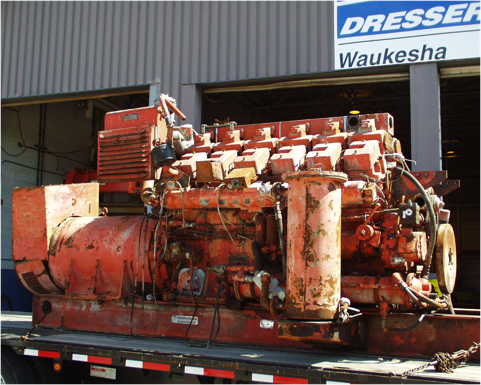 We say, ‘We’ll never forget’ the tragic events of 9-11 and for all the lives lost and horrific events of that infamous day there were also lots of stories of grace and many survivor stories.

Including an unlikely survivor story of the ‘enginator that could’—the Waukesha Pearce enginator, that is.

According to the Waukesha, Wisconsin Historical Society when the World Trade Center was built in the 1970’s five Waukesha Pearce enginators were installed during the construction phase in subbasement six—the lowest level of Tower One on the west side. A sixth unit was added at a later date. The heat exchangers on the units used water pulled from the Hudson River to operate and were rated 1000 KW continuous,1100 KW standby and was later upgraded to 1200 KW standby.

But even before the terrorists flew jet planes into the towers the enginators had a close call when a different terrorist attack hit the underground garage of the north tower. That day, Feb. 26, 1993, the units ran for 3 hours and 10 seconds after the bombing. The room holding the enginators filled up with water from broken pipes and was manually turned off.

Personnel stayed with the engines until the water level was too high and then found their way out in total darkness. Luckily their service truck was right out front.

The engines did come on also on 9-11 when the devastation was much worse. Both towers collapsed and more than 3,000 people—innocent workers and fire and rescue personnel lost their lives that day. But in a brave and valiant attempt the generators did power on to supply that emergency power and who knows how many people that may have helped to find their way out even in that brief time.

Of the six engines at the World Trade Center three were declared unsalvageable and immediately scrapped, two were rebuilt for another service life and the third was returned ‘home’ to the Waukesha Engine Factory in Wisconsin in 2002 where it received a hero’s welcome of sorts by employees.

Simultaneously with the Twin Towers collapsing the Federal Reserve Bank just two blocks away from the epicenter experienced a power grid interruption but the gold repository had four Waukesha VHP 5900 diesel engine generators that took over and met the power needs for over two weeks.

The terrorist attacks on the World Trade Center were major and from an outside source but natural disasters are increasing annually as the severity of storms increase.  Storms that used to be dubbed 100 year storms or even 500 year storms are happening with regular frequency these days leaving communities without normal sources of power sometimes for weeks.

While vital services like hospitals and emergency services have always used back up power systems more and more businesses and residents are ensuring they have generators on hand. The increased severity of hurricanes, floods, fires and tornadoes have been challenging but generators have come to the rescue and help keep homes and businesses heated and operating.

Because these generators are so vital it’s important to keep them maintained in a safe and efficient manner. Alan Gross of AMG Bolting Solutions suggests, “Make sure you have the right tool for the job.”

Matt Braddy of Targa Resources knows firsthand the importance of using the right tool—he’s worked on Waukesha Pearce equipment—albeit not the same as the ones used at the World Trade Center.

“I use your (AMG Bolting Solutions) torque guns for a few jobs on them. I use them to torque rod bearings on them, hold down bolts and also on the turning mechanism when we don’t have our pneumatic barring motor,” he said.

Braddy continued, “We also use it to torque hold down bolts as well as other bolts on the compressor during overhauls and annual services. We also rely on it heavily for cylinder head changes on Waukesha 7042 due to the frequency of changing them.”

Having the right tools to safely and efficiently keep your engines and equipment working is vital to keeping us working—and may even save some lives.

This site uses Akismet to reduce spam. Learn how your comment data is processed.